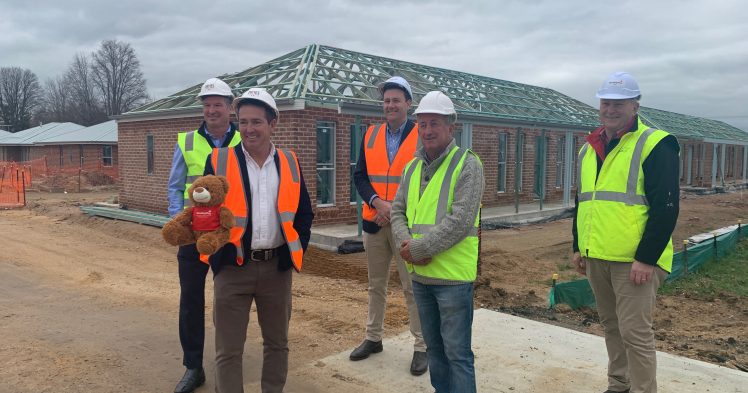 Article Published in the Western Advocate 26.6.20

A NEW affordable housing development will be available to some of the city’s most vulnerable before the end of the year.

Work is moving at a great pace at The Brickworks on the corner of Havannah and Baillie Streets, where Housing Plus has invested $6.4 million to have an affordable housing complex built.

Housing Plus is delivering this project through the NSW Government’s $1.1 billion Social and Affordable Housing Fund (SAHF), and local company Hines Constructions has been hired to do the work.

Housing Plus CEO David Fisher, said the location was chosen due to its proximity to the central business district.

“Housing Plus started in Bathurst over 30 years ago as a housing provider, so we have over 300 properties in Bathurst at the moment,” he said.

“In terms of this development, it’s a convenient location for the centre of town, so it will be convenient for our tenants to access shopping and other services and it provides enough space for the number of properties we wanted to provide.”

Twenty units will be built and they’ll be a mix of one and two bedroom dwellings.

The complex has been designed to fit within the existing heritage area and Hines Constructions’ David Hines said they’re being built with all the mod-cons.

“We’ve got twenty brick veneer dwellings here. Each has got its own carport, there’s a mix of one and two-bed units, they’re fully insulated, they’ve got all the mod-cons in it, so I’m sure they’ll be good for another 50 or 60 years,” he said.

The complex will be utilised by people who are on low incomes, including people at risk of homelessness, victims of domestic violence, older women, people with serious medical conditions and people with disabilities.

Member for Bathurst Paul Toole, who visited the site on Thursday, said it was an important project for the community.

Construction on the complex is due for completion in October and shortly after that tenants can move in.

People who would like to live in this development are asked to contact Housing Plus to signal their interest.

“Basically you’re put on a property register and those most in need are allocated a property,” Mr Fisher said.

The development application was lodged with Bathurst Regional Council in 2019 and approved in August 2019.

Mayor Bobby Bourke said he was pleased this site was finally going to be utilised, especially for something so important. “I grew up in a Housing Commission house, so I know what it’s like for families to struggle, so I’m glad to see in my term [as mayor] for something to come about for people in need,” he said.

The Brickworks development is part of Housing Plus’ $75 million investment to provide 220 new homes across the Central West as part of the SAHF.

There will be 51 affordable homes built in Bathurst over a three-year period, which equates to a $16.5 million spend in the local economy.